First-generation entrepreneur and a leading supplier of post-press equipment for the packaging industry, Prem Vishwakarma, shares his journey of becoming the director of Robus India

At the age of 14, I left my home with no clear idea, no plan and with very little money (Rs 800) in my pocket. I landed in Delhi in 1992. At the time, I used to repair electronic gadgets and it was my hobby. I used to repair cameras, electronic inverters and electronic appliances. Due to the circumstances, I couldn’t complete my schooling.

My elders did not know our roots, so it’s tough to say where we are from. When I left home, my father did not stop me. My electronics knowhow was my only strength and it pushed me to leave home. I assumed I knew multiple things and those skills will be enough to get a job in Delhi. But I was wrong and I could survive for only four-five days with the amount I had.

So, I shifted to Delhi railway station and stayed at the platform for six months. That period taught me the best and unforgettable lessons of my life. There is a separate and independent system to survive on a railway platform and you have to be part of that. I became a part of that. My eagerness to learn how to repair electronic gadgets pushed me to work for free. I did, and learnt.

First job
In 1992-93, I got a job at one of the computer hardware shops in Rajendra Place for a remuneration of Rs 1,800 a month. I was good at work, but with poor communication skills and no etiquettes, thanks to my upbringing. Because of this, my grading was the lowest.

Then another person joined the company at the salary of Rs 28,000 a month, and he did the same work that I did. I was shocked to learn this. Then I came to know that he had done courses like MCSE & MCP and BTech. But he did not have the practical knowledge.

That hurt me because I knew the work and was getting only Rs 1,800. I went to meet the owner of the company and asked why I was getting such a low salary even though I knew the work and was performing well. He told me the reason. MCSE & MCP were considered to be tough courses then. I asked him if I completed the course, would he increase my salary. And he agreed. I told him that I will see him after completing the course, and left the place.

Going to school
Then I came to know that the examination fee for the course was Rs 4,000 and I was broke. I called my father and asked for money. He had no idea where I was and what I was doing, no communication at all. But he arranged for Rs 8,000 to be sent.

Again, I was in for a shock when I visited the coaching centre and came to know that Rs 4,000 was just the examination fee. The coaching fee was extra. I thought it was a completely wrong move. So, I started taking help from the students who were getting coaching at Kalkaji and they were really nice, and helped me with their notes, books, and coaching tips.

I used to study for 16 hours a day and to save money, had only four eggs a day, two in the morning and two at night. Until then, I was a vegetarian and didn’t eat eggs. My landlord kept an eye on me and was worried about me. He called my father saying that I’d die — I eat four eggs a day and study 16 hours and don’t come out of the room. It continued this for three months and I completed the MCSE, all certification in the first attempt.

After receiving the certificates, I went to meet the owner of the computer hardware company and asked for a job with a higher salary in front of the entire staff. The owner denied. Then I went on my own and started my own venture. But it failed, and I went into service again.

I came to capital equipment trading and assembling in 2016 and established Robus India. God has been kind to me. 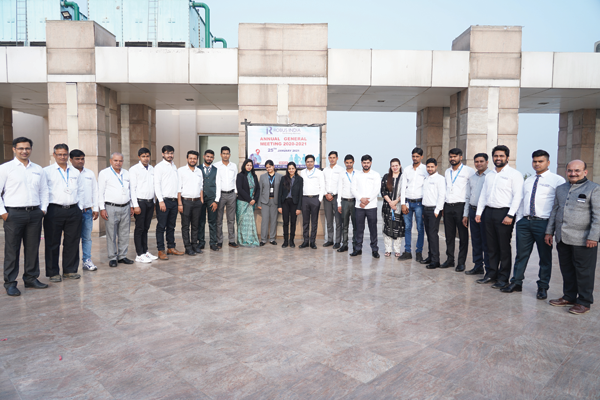 Learning from Bobst
I was a service provider for Bobst India. I used to work for an IT company which provided services to the Swiss giant. Bobst used to change its set-up often, and we established its set-up three times in two years. One of Bobst’s personnel had liked my work and offered me a job. The benefit with Bobst was, they had company transport. I accepted the offer and joined Bobst India in 2001.

The work was less, so I started going to the production plant and started helping produce the machines. Gradually, I came to know IT, production, electrical — many things about the company. Instructors who used to come from Switzerland found me to be a fast learner.

Later, Bobst decided to import technology/parts from China, and I was the part of the in-charge team. So, I went to China and acquired knowhow. Bobst India started manufacturing machines in India in 2004-05 and are still manufacturing folder-gluers.

Then one day, a senior official called me and said that I have to go with one division as per our company policy, and I was afraid because of my academic background. So, I shifted to assembly. I reached up to the level of assembly head and R&D coordinator, which gave me excellent exposure.

Another opportunity Bobst gave me was to visit customers in India. And it helped me gain knowledge. However, one fine day, I exited Bobst after being there for 14 years. It was at this time, I decided not to take up another job.

Starting Robus
I started my journey into entrepreneurship, and initially started tapping printers who needed help with economical prices. I got a call from RSG Packaging in Haridwar. RSG was facing problems with a die-cutter manufactured in China and I could repair it. Pawan Kumar Gupta, the chairman of RSG, allowed me to stay at his home. He is so humble, and he was impressed with my job. The Indian representative of a Chinese manufacturer offered me a job. I told this to Pawanji and he asked, if I would like to go for a job again, and I said no.

He offered me the help start on my own. His offer was genuine and I accepted.

Then, RSG referred me to Universal Print O Pack and they asked me to repair their folder-gluer. I told them to contact the manufacturer, but he insisted, and I had repaired a folder-gluer.

In December 2015, he took me to Paktek and I discussed with them about the need of an Indian customer.  We also shared our R&D details to make a modification in a machine. But Paktek was not ready to make any modifications on their standard machine.

After that we went to Hongjing, China. They listened to our ideas and were ready to make a machine according to our R&D. Then, we have started promoting Robus standard machines in India, assembled by Hongjing.

We signed the deal with Dayuan and named our venture Robust, but we could not find a registration with the name. So, we made it Robus.

We asked Dayuan for changes according to our knowledge and market requirements. We brought one standard machine, which is still running in Haridwar, Uttarakhand.

We participated in PrintPack India 2016 and shouted about Make in India because we participated as a vendor for Hongjing, and the complete assembly was to be done from our side in India. After this, we have decided to open our own R&D and manufacturing unit in India, but due to challenges, which many manufacturers are facing, we were not able to open our manufacturing unit. But yes, we have our R&D section, in which we collect many other challenges and information from customers and make a modification in a machine according to the same. Adzone was our first customer of the advanced folder-gluer and we never looked back.

From 2019, we started dealing with YCM near Shenzhen. This is the most advanced city in China. So, we could easily get all the accurate assemblies for our Braille attachments as per the international standards.

Today, we deal in die-cutters, folder-gluers, tape applicators, film lamination machines, flute laminators and other machines. The best thing was that I was not from a sales background and had good technical knowledge. It played an important role in convincing the buyers to select the best configurations as per the requirement. Our customer retainership is around 70%. Most of our business comes from references.

Believe in blessing
I am a firm believer that blessings work. I spend more than I earn, and my wife Alka’s salary helps run the home. We came to know each other in 2002 and married in 2004. People had doubts whether I will attend my wedding or not. We have two kids – Ayati and Inoday.

Today, Robus India is a team of 37 people. In the future, I want to establish an apartment complex for Robus’s employees with the same facilities for everyone.

I believe that you should do whatever you want to do, but with focus.

Get started with the Machine DemoWe'll answer any questions and dig deep to understand your requirements & business challenges.